Black ants with wings represent the reproductive population within a colony. They lose the wings after mating. Although they are generally a nuisance, one common concern that many people have is; do black ants bite? While some black ants may bite especially when provoked, others are harmless.

The name black ants are used to describe a group of ants whose appearance is black in color. These are mostly black carpenter ants and black garden ants. Do black ants bite? In most cases, they tend to be docile. However, when their nests are disturbed, they will bite to defend themselves.

Since the carpenter ants are big, their bites could break the skin. They could also cause pain if they spray their defensive chemical on the victim. This ability to attack is what the ants use on the insects too and other ant species whenever they feel threatened. The black imported fire ant has the most painful and dangerous bite.

The black carpenter ants are known to cause damage to property. They also have a complicated nesting habit as well as a complex life cycle. This combined with the discomfort of their bites is enough reason to want to have them under control. 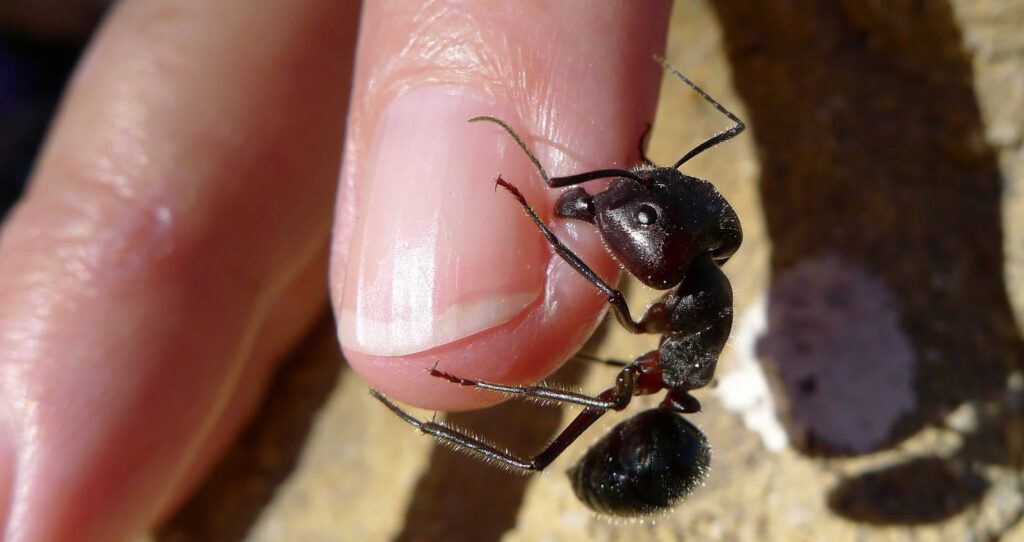 Although bites from some ants or insects may not be harmful, it is always important to know which ones require medical attention and which ones may go away with home remedies. Some black ants do not bite while some do. Identifying the species of the biting black ants will help one know if they will treat the bump themselves or see a doctor. Is that being the case, which black ants bite? There are a number of these as discussed below:

Black fire ant: Fire ants are known to bite as well as sting. They tend to bite so that they can get a grasp of the victim and be in a position to inject venom into them. This results in sharp pain and a burning sensation. Some people may be allergic to the venom and it is necessary to see a medical professional as soon as they have been bitten and experience nausea, severe headaches, severe itching and pain in the throat.

Carpenter ants: Black carpenter ants live in colonies containing thousands of ants. They do not sting but can bite. The biting is mostly done by the larger worker ants. At times they will go ahead and inject formic acid into the victim. These ants are highly territorial and will rarely bite humans but fiercely attack other ants that invade their territory.

The effect that black ant bites have on different individuals will vary. While some people will itch when bitten by certain ants, others may not. The extent of allergic reactions may also vary. People who are allergic to black fire ant bites will not only itch but develop pustules as well as other complications. In other cases, the bites of black ants only need one to use some hydrocortisone or Benadryl cream to reduce itching and minimize the chances of swelling. Avoid as much as possible scratching the area. 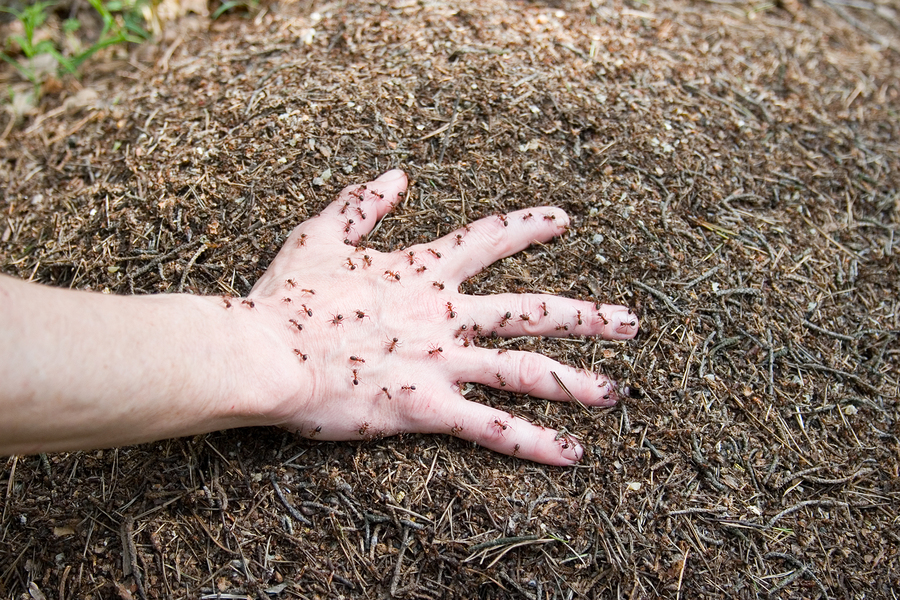 In most cases, the tiny black ants will hurt with its bite but it will not be dangerous. Among some of the little black ants that bite include:

Acrobat ants: These will mostly attack when disturbed. They tend to be quite aggressive and will attack in big numbers. They also produce a bad smell while at it to alert the others of impending dangers.

Pavement ants: These are rarely aggressive and will only attack in defensive. They have the ability to carry out attacks in the form of stings and bites. 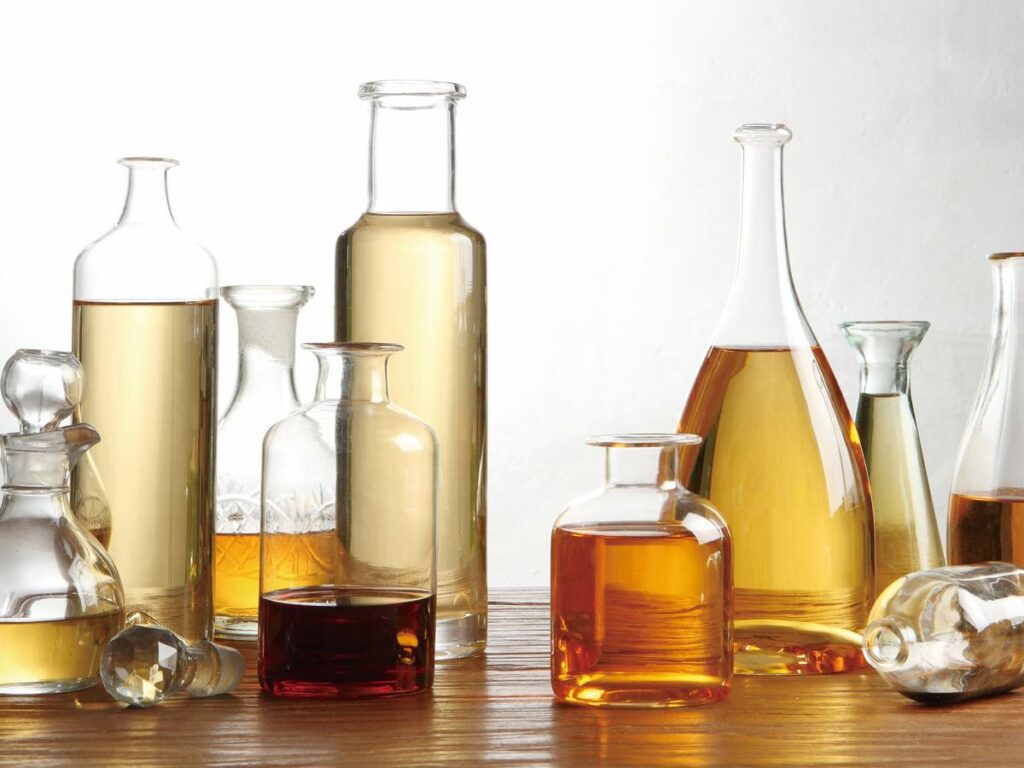 There are a number of options on what can be done for black ant bites. This though is not always necessary unless the bite is by a fire ant. Ant bites tend to resolve without intervention. In most cases, the treatment for black ant bites is aimed at alleviating the itching and pain.

There are many home remedies that one can make use of for treating black ants with wings bites. First, wash off the bitten area using water and soap. Make a thick consistent paste using vinegar and baking soda. Rub this on the bite to avert swelling and itch. Avoid as much as possible scratching the area to avoid breaking the skin which could cause the bite to get infected.

Where the bite is from black fire ants, it is necessary to seek medical attention immediately. Apart from being very painful, some people could develop an allergic reaction to ant’s venom. For people who already know they are allergic and use epi-pens, they should take shots as soon as they are bitten. 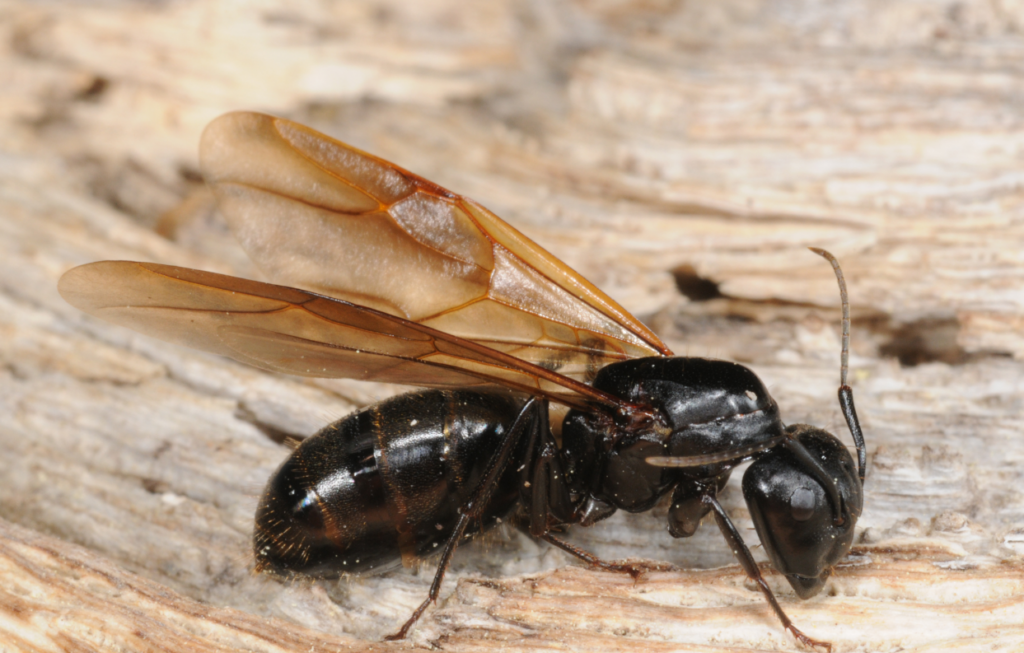 Most ants tend to be wingless. However, at times black ants with wings can be seen. These winged ants are known as swarmers, alates or reproductives. They have elbowed antennae with waists that are constricted. The hind wings are normally smaller than the front wings.

There are three ant castes within species. The swarmers are the ones that have wings. The winged males and females are known to swarm in given seasons. It is after mating that the fertile female ants take up their role as queens. They could establish their own colonies or lay eggs in existing ones. Once mating is over, the queen sheds her wings and so do the male swarmers. The males die soon after.

The presence of winged ants in a home are indicative of an infestation. It means that the ants have established themselves and are nesting around. One may have to deal with eliminating them or call in professionals to help in getting rid of them. 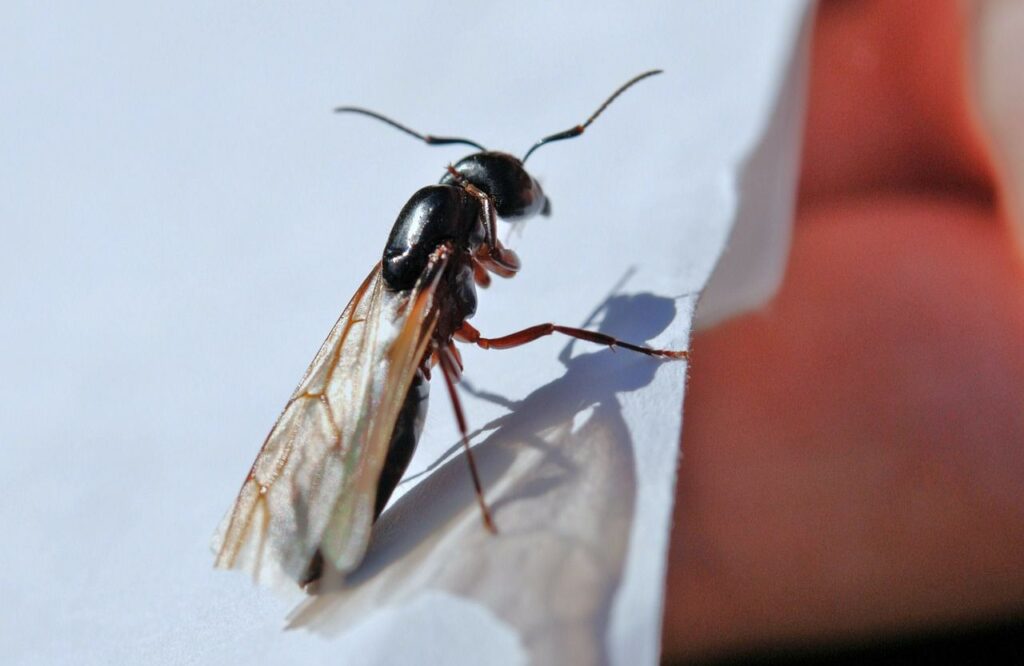 It is possible to get big ants with wings as they fly to mate with reproductive females. These are likely to be carpenter ants. However, proper identification should be done not based on size and color but on other identifying features.

The big ants with wings are known to swarm in spring and feed on many things honeydew and other insects included. Carpenter ants love to build their nests in wood especially pieces that have been damaged by moisture. They, however, do not feed on it but could cause structural damage within a home. Carpenter ants are most active in the spring. As spring comes to an end, they may venture outdoors. They could, however, go into the house to forage for food.

Small ants are known to have populations that are moderate in size. They contain two ant queens or more. Small black ants with wings are most common between June and August. This is the time during which mating takes place. Once mating has taken place the females go on to become queens. They could join existing colonies or start their own. The males also lose their wings and live only a little longer before they die. The newly established colonies tend to grow very fast.

Black Ants with Wings in House 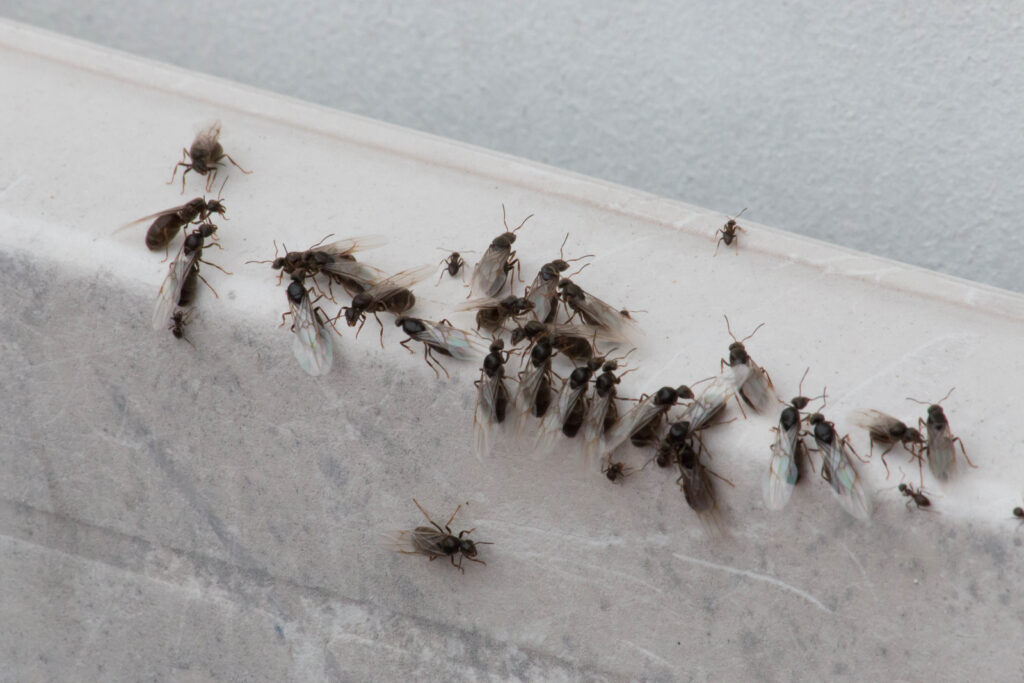 The presence of black ants that have wings in the house is never a good sign. This is more so during winter since it could be a sign that there is an infestation within. In the summer, their presence could be as a result of them flying in and thus may mean no problem. Finding a winged ant or two indoors during the summer does not necessarily mean there is a problem, but if winged ants are seen in the home during the winter months, there is a strong likelihood that there is a carpenter ant nest within the structure.

When the ants build their structures indoors, there are various options for their elimination. One could make use of insecticidal dust to get rid of them. When this is injected into the nesting area, it will help in eliminating them. Where accessing the area is difficult, holes can be drilled and the dust used to treat the area.

Other than the dust, baiting is also another option that is viable. The baits are normally slow-acting but more effective. They are capable of eliminating a whole colony with time. They also are made from non-toxic materials and therefore most suitable for use indoors as they will not harm children, pets or plants. Check out the labels when purchasing one to ensure that you pick ant-specific bait.

The use of insecticidal sprays for ant extermination is not recommended. This is because they have little impact on the ants. The sprays only kill foraging ants and have no effect on the queen and her brood. When the queen senses danger, she accelerates her egg-laying rate. It is also possible for the ants to break up into more colonies which will worsen the problem. These are only suitable for occasional invaders but not getting rid of an entire infestation. Directions for use should be followed to the root.

Biting Inside of Lip Causes, While Eating, Anxious, on Bottom Lip, How to Stop and Heal Sore Bitten Inner Lip