What is a receding chin? What causes a receded chin? What are some of the recessed chin corrections including surgeries? Can hairstyles and exercise help people with a chin that is receding?

What is a receding chin? Definition and is it ugly

Receding chin refers to a smaller, shorter and backward retreated chin. When compared to a normal chin, it is less prominent and this makes your facial contours to look so unnatural. Furthermore, the mouth tends to appear protruded (especially your upper lip) making one look dull and inelegance. In extreme cases, a short chin can make it difficult to close your mouth.

Since beauty is the eyes of the beholder, we cannot conclude that a receded chin is ugly. Some people find nothing wrong with it. However, there are those who do not like a chin that is receded and would prefer to go for a correctional receded chin surgery.

‘Why is my chin receded? It is ugly and I do not like it’ I once heard someone complaining. Well, there are a number of receding chin causes that include:

A receded chin can be a problem that someone is born with i.e. the lower jaw and chin growth gets affected even before a child is born. One of the common causes of the congenital receded chin is micrognathia where someone has a smaller lower jaw when compared to the upper jaw. A shorter lower jaw (mandible) will definitely make the chin smaller and recessed.

Furthermore, the trauma that affects fetus bone growth can also lead to mandibular hypoplasia or recessed lower jaw. Congenital defects are the most common cause and it is possible to end up with receding chin and underdeveloped jaw as well as “bite that is off”

Although quite rare, there are instances of people showing symptoms of the recessed chin at adolescent. This has been associated with a number of diseases and conditions that include “chronic temporomandibular joint disorders which cause regression of the lower jaw” [buzzle.com], arthritis affecting lower jaw or temporomandibular joint or hemimandibulectomy, a cancer treatment where a part of your mandible is removed.

It has been noted that problems such as teeth crowding as well as wrong teeth position often happen to people with a small chin. Furthermore, people with chin recession can also have a double chin problem just like any other person could.

As we have seen while covering causes, congenital defects are the common cause of a recessed chin. This means that a baby can be born with a shorter, smaller and backward recessed chin.

If you are a mother of a baby with this problem. You need to know that a recessed chin can make breastfeeding cumbersome with some mothers ending up with breast nerve damages. Some of the good receding chin breastfeeding ideas include breastfeeding while the baby is in a football hold, ensuring a correct ‘latch on position’, use a breast pump and so on.

Having a recessed chin can diminish one’s facial appeal, reduce self-esteem as well as mentally perturb the affected. In this section, we are doing to discuss receding chin corrections or how to fix a recessed chin.

The first way to fix a receded chin is treating what could be causing it. If it is a disease, go for diagnosis and treatment. This option is good for people who suffer from active chin recession (one that comes later in life, especially during the adolescent stage. 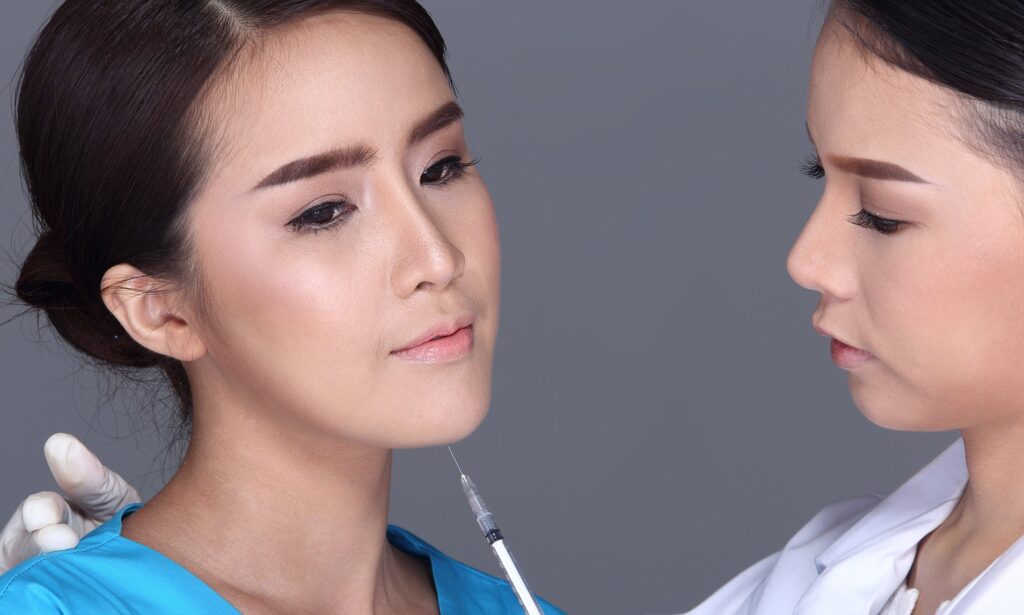 This is the most common correction, especially when caused by a congenital problem that cannot be treated. You need to discuss with an orthognathic surgeon since he or she will be in the best position to deal with your problem. The common surgical operation includes:

Mandibular advancement happens when bone growth is stimulated with the application of external forces over the corticotomized site. You will have an oral device or braces surgically mounted on your mandible that will gradually distract and stimulate bone growth. Engage both your orthodontist and maxillofacial surgeon for advice on this procedure.

This involves splitting and repositioning the lower jaw and moving it forward to make the chin to look normal. It is often recommended to people whose lower jaw is also recessed. This procedure is also known as sliding genioplasty and titanium plate might be used.

Mentoplasty “refers to correcting defects/deformities or altering the mandibular contour—e.g., removing fat, implanting silicone or other prostheses” [medical-dictionary.thefreedictionary.com]. It is good for people whose lower jaw is the normal size and a smaller chin is their only problem.

If you opt for a recessed chin implant, you need to know that they are not a permanent but far much less expensive option.

If you do not want to go for surgical corrections of a recessed chin, you could play around with makeup use as well as hairstyles that will create a facial balance and reduce the appearance of your small chin.

Hairstyle for women with receded chin

If you opt for hairstyles, the aim of any of the hairstyles for receding chin is to create a center of attraction away from the chin as well as try to create a facial balance.

Men can try full beard, sideburns and chinstraps as well as goatee in addition to hairstyles to try to hide their small chin.

Chin Dimples Meaning, Personality, Female, Guys, Baby with Chin Dimples and How to get Rid of Clefts or Dimpled Chin